This book represents an incredible act of courage and vision. In 1997, when Dressage in the Fourth Dimension was originally published, bestsellers like Susan Chernak McElroy’s Animals as Teachers and Healers and Monty Roberts’ The Man Who Listens to Horses were a couple of years away from becoming bestsellers.

At that time, those of us who did, in fact, see horses as sentient beings, and even as teachers and healers, kept quiet about it for the most part. To say that you were riding for any reason other than sport or recreation was suspect. The phrase “horse lover” was applied with disdain. And anyone who admitted to having a spiritual experience in the presence of one of these amazing creatures was considered eccentric at best and more than likely delusional.

Along came Sherry Ackerman, an accomplished equestrian and philosopher who not only suggested that riding could be used as a path of transformation but also all but guaranteed that anyone who learns to ride well can’t help but be transformed.

Dressage in the Fourth Dimension was a pioneer work in awakening consciousness, a finger pointing at the moon. Now in its second edition, its message is right on time. It requires readers to deconstruct every assumption they have ever held, to ask “Why?” and become okay with not-knowing. Humanity’s alienation from nature can no longer be ignored. The enormity and immediacy of the crisis is evident.

--From the Foreword, by Linda Kohanov, author of Tao of Equus and Riding Between the Worlds 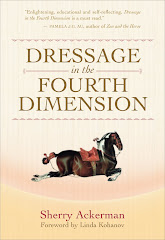